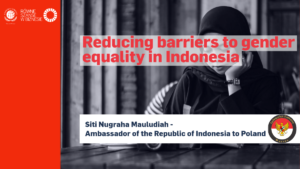 As an introduction to my short presentation about gender equality in Indonesia, I would like to tell you a story. About my mother.  My mother was a nurse. She continued working after she got married, and worked until she had her 5th child. I am her 8th. For all I know, my mother was a great homemaker. She always had someone to help her at home. Be it her sisters, her cousins or her nieces to help her look after her kids when she was still working. Later, when she stayed home, we had a maid to help her with the house chores. Well, of course, her five daughters and three sons, became her helpers when the maid was on leave.

Our father was the king of the house. My mother attended to his needs. Almost everything. And as a consequence, we, the children always put him before her. But one day, our father was very angry with one of my brothers. I don’t remember what made him angry, but I remember vividly this is what My father said to him: ‘Never ever raise your voice to her. Do you know why? Because Heaven is under the feet of your mother!” Ever Since, we never dared to raise our voice at her.  This was the dynamic at home. He is the King, always has the last say, but the mother is the one we seek for solace and we hold high in respect.

My mother taught me to always stand on our own. For instance, she made sure that I had enough money when a boy asked me out. She said, never asked your male friend for a treat. In our society, when a boy asks a girl out, he pays. Every time.

At the same time, she insisted that all of her daughters know how to cook, how to clean the house, how to iron, etc. Meanwhile, our father pushed us to always be the number one at school. No score is good enough if it is not the best score in the class. He did it both to his sons and daughters. When I graduated from High school, I told my parents that I wanted to become a flight attendant. My mother was against this idea. She said I had to continue with my education until I received a university degree. And guess what her answer was when I asked ‘why?’

“You need to make sure that when something happens and your husband could not provide for you and your kids anymore, you could help your family to earn money.” Her take to education for her daughters is not so that we have an equal standing with men. But simply to save it for a rainy day. Quite advanced for her time, considering her very traditional background and upbringing.

I guess it was rather a long opening story. But I just want to give you a picture of how it was then and how it is now. Most women who lived in big cities, at that time, more or less have the same take as my mother about education for their daughters. But the majority, they believe that women are destined to be a wife. A mother. Therefore, no need to take higher education if, at the end, they will end up mending the kitchen. But we have come a long way now.

Since the introduction of a number of gender related regulations, including gender mainstreaming policy by the Government of Indonesia in 2000, the situation of gender equality has shown quite an improvement. Indonesia has one of the highest literacy rates in Asia (females 93.59% and males 97.17%)

According to the World Bank Data, on Economic Opportunities:

On Public life and decision making:

In management, according to a study done in ASEAN, in 2017, Indonesia has the highest proportion of senior business roles held by women (46%), followed by Philippines (40%), Thailand (31%) and Singapore (30%). In the current Government, 5 out of 34 members of Cabinet Ministers are women or 15%. Sounds not very encouraging, but they hold rather powerful ministries, namely, Foreign Minister, Finance Minister and Labor Minister as well as Minister for Environment and Forestry. All are women. The notion that women usually hold not-so-powerful portfolios is not true in my country. And for the first time in history, the Speaker of the Parliament is a woman.

Compared to the numbers a decade ago, these show rather encouraging development. And before I conclude, I want to share a brief story about gender equality in the Foreign Ministry. For the past ten years, the new female recruits outnumbered their male counterparts. Furthermore, the three best students of Foreign Service Academy mostly held by female participants. Yes, there are only 12 women ambassadors out of 98 sitting  Ambassadors at the moment, but it is slightly bigger proportion compared to when I started joining the Service, where there is only 11% of women in the class. This shows that the intervention made a difference.  There have been a number of gender-neutral policies replaced by more gender-sensitive ones in the Ministry.

To be honest, we still have a lot of homework to be done to reach gender equality in Indonesia. Our society is very complex. We lived on 17 thousand islands across some 2 million square kilometers.  We come from around 1.300 ethnic groups, and speak around 300 different languages, embracing different religions and faiths. Different traditions, religions, levels of education, pose challenges in implementing gender equality across the country. But we realize that women make up almost half of the population. We know that women’s role in the economy as well as in politics, is as important as in their socio-cultural responsibilities. As a nation, we have agreed to advance the role of women in all walks of life. It is the practical day today’s implementation that sometimes faces difficulties, as women advancement is not always easily socially accepted. But we are on the right track of reaching there. I have confident that before we know it, we will be there, where equality for all is not only a slogan, but a reality.

Siti Nugraha Mauludiah – Ambassador of the Republic of Indonesia to Poland